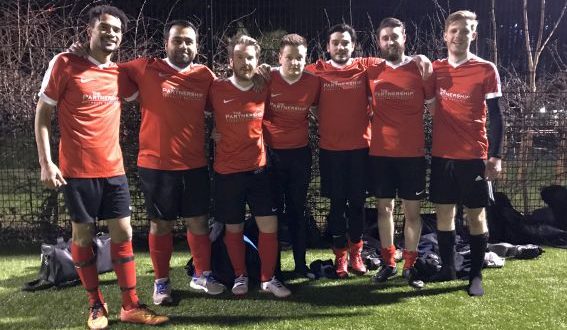 And so to the inaugural game of the season for The Partnership FC on a chilly night in Waterloo..The game started at a fast pace with some great interplay from “Red Card” Cattell, “Hot Line” Thring and “Rocket” Wren resulting in an early goal from “Hotshot” Sherrington. A lapse in concentration allowed the opposition to pull a goal back but the lead was restored via the penalty spot, “Hotshot” taking no prisoners with the finish. The team was in full flow now, “Lord” Young was running around like he owned the place and “The Rock” Shah proving difficult to beat in goal. The third goal soon came from a rebound after an incisive pass from “Magic” Miller. “Hotshots” attempt was blocked but “Magic” was waiting on the edge of the area to finish it off into the roof of the net.

Having put so much effort into building such a commanding lead the indulgence of the winter break started to show and a slight dip in intensity allowed the Accounts Unplayable to work their way back into the game although “Hotshot” managed to pull one back during this period with another ferocious finish. However, disaster struck , much to the annoyance of the home team, as the opposition took the lead with 6 minutes left on the clock.

Most teams would have crumbled but we’ve got too much R.E.S.P.E.C.T for ourselves to let that happen. The team rallied and two quick fire goals from magic put the game to bed and “The Rock” lived up to his name with some great organisation to shut the opposition out.

Good start from the boys in the quest for the Archbishop 5’s Championship Title, tune in next week for game 2.

And did those feet, in ancient time
Comments are Off