We are pleased to announce that The Partnership has received the ‘Innovation of the Year’ award at the 2021 Modern Law Conveyancing Awards. Winners were announced at the awards ceremony held at The Rum Warehouse in Liverpool on the 25th November 2021.

The Modern Law Awards which launched in 2016, in association with Modern Law Magazine, has become an annual staple in the conveyancing calendar with top innovators and achievers in the national conveyancing market being recognised and rewarded for their efforts.

Peter Ambrose, Managing Director at The Partnership said “I am absolutely delighted that we have won this award which recognises the genuine innovation that we have delivered with our new Enquiry Explorer. This unique technology goes to the heart of the most intricate part of the house buying and selling process making it more transparent than ever before. We will shortly be extending its use to agents and indeed other lawyers – this is a genuine gamechanger.” 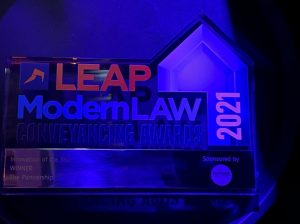 5 top tips to protect clients against fraud
Comments are Off

“Honestly, why does conveyancing take SO long?”
Comments are Off