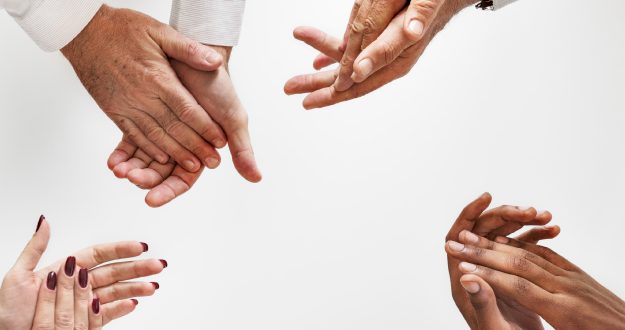 At the start of October, for just a couple of days, something very strange happened.

Everywhere you went on social media, lawyers were receiving praise.

“Thank you for your hard work … heroes – every one of you … amazing support”.

Someone even suggested a campaign to give conveyancers the clap like the NHS back in March last year.

Although I might have misinterpreted what they actually meant ( some confusion between STD and SDLT? )  it did bring back memories of a population standing on doorsteps banging pots and pans in recognition of the NHS.  Now, after a derisory pay increase and stories of nurses being abused by the public, that adulation and respect has a surreal “Sliding Doors” feel about it.

Which begs the question – will this new-found love of lawyers follow the same depressing trajectory?

Having interviewed dozens of lawyers over the past 18 months, it’s clear that conveyancers were in first place in the “Drawing the Short Straw” competition during the recent property boom.

Working long hours under unrelenting pressure in an outdated process that everyone thinks is overdue for a revamp, or in modern parlance, “not fit for purpose”. There are many parallels between the NHS and buying a property.

After all, when was the last time someone who’d been to hospital jumped on Trustpilot to post “Great experience … can’t wait to do that again.”

It’s hardly a visit to Legoland is it?

This question will no doubt spur some bravely anonymous readers to post something offensive after this piece.  How on earth can you contemplate comparing NHS staff to conveyancers?

Even our most enthusiastic clients would struggle to describe us as life-savers.  We can make them more comfortable but even the lubricant that is technology can’t eliminate the digital rectal examination pain that is the house buying process.  But comparing lawyers to those for whom we whooped last spring is just a step too far, surely?

So here’s the thing.

In the same way that everyone knows the NHS could do with improvement, actually solving the problem turns out to be quite tricky.

Which is exactly the same as lawyers.  The SDLT holiday has caused many to re-evaluate their lives and have left the industry.  This is a double whammy; aspiring new lawyers have fewer experienced people to train them, so it takes longer and the quality of training will be poorer as those few experienced lawyers have less time available to spend on that training.

Secondly, the systems that underpin the NHS are hopelessly out of date and their interconnected nature makes them almost impossible to fix.  The last attempt cost about £10bn by the time it was scrapped.

For lawyers, although we have seen some trivial changes such as electronic identification checks, fundamentally, the nature of the process makes it difficult to fix in one go, as activity is always in progress and can’t be put on hold to await implementation.

Thirdly, the NHS suffers from exploitation from private companies ranging from drugs distributors to main contractors who increase costs to the service despite adding no value.

Lawyers have exactly the same problem.  They are called Panel Managers.

Finally, the eye-watering charges for car parking simply mask the fundamental problem that the pricing model for the service simply does not work.

It’s the same for lawyers – their cajones-free approach to fees is embarrassing.  Although the appalling service provided by some suggest they should be “free at the point of delivery” like the NHS, for others their false low fees are nothing but a smokescreen.  Sneaky additional charges such as “two week exchange to completion surcharge” are as outrageous as forcing hospital visitors to pay £10.00 per hour for parking.

Let’s remember to praise them

As an agent, deep down, we know lawyers, like nurses and doctors, are trying to do their best, so let’s remember how they made you feel on October 1st.

How can you forget those cheerful smiling faces on your buyers when they realised they saved a whole £165 in Stamp Duty thanks to you and their lawyer.

And if you do feel like giving your favourite lawyer the clap, well, heck, why not indulge?

16. Confessions of a cyber conveyancer
Comments are Off
PLEASE NOTE: Our offices will be closed from 4pm on 16 December 2022 for our annual Christmas party. The final day for completions is 20 December 2022. We are closing at 1pm on 23 December 2022 for the festive season break and will reopen at 9am on the 3 January 2023.